Jazz In The Family

It’s not long until the big band sound of the Count Basie Orchestra swings into Australian shores. From Wednesday 10th October the talented group will be boasting the voice of Carmen Bradford in Melbourne, Brisbane, Sydney and Perth.

Being the daughter of legendary trumpeter/composer Bobby Bradford and composer/vocalist Melba Joyce, musical talent is in Carmen’s blood. However, music goes back slightly further to her grandfather, who sang with Lucky Millender’s Big Band in the 40s. Now, Carmen continues to make history for herself and her family in the world of Jazz. 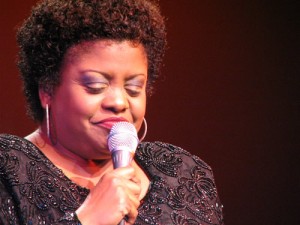 The Count himself discovered Carmen and her incredible musical talent, hiring her for his orchestra in which she featured for nine years. Since then, Carmen has worked with some of the biggest names in music and jazz history such as John Clayton, Doc Severinsen, James Brown, Patti Austin and Frank Sinatra.

Carmen’s soulful voice has seen her succeed as a solo artist and is known for her critically acclaimed album, ‘Finally Yours’, which was released in 1992. Her second album, ‘With Respect’, was released in 1995 boosting her reputation to being one of the jazz world’s most exciting vocalists. Carmen also occasionally sang for stage productions and Hollywood films!

Don’t miss the performance of the year and be part of a night that will go down in your event history! Performances are strictly limited so don’t miss out on this incredible opportunity.