The eclectic programme features solos and duets – songs from musicals as well as a selection of opera, traditional folk and pop. The vocal powerhouses met while sharing a dressing room for 2010’s Sondheim! The Birthday Concert with the New York Philharmonic at the Lincoln Centre.

Mandy Patinkin, one of the most versatile and compelling actors, singers, and storytellers of our time, originated Broadway roles in Evita and Sunday in the Park With George, and stars in the critically acclaimed Showtime series “Homeland” and past CBS series “Chicago Hope” and “Criminal Minds.” His many movie performances include roles in Yentl, Dick Tracy, and The Princess Bride.

Nathan Gunn has made a reputation as one of the most exciting and in-demand baritones of the day.  He has appeared in internationally renowned opera houses such as the Metropolitan Opera, Royal Opera House, and Paris Opera and as a concert artist with symphony orchestras around the globe. His solo recordings includeJust Before Sunrise and American Anthem.

The duo will be joined by their long-term accompanists Paul Ford and Julie Gunn. 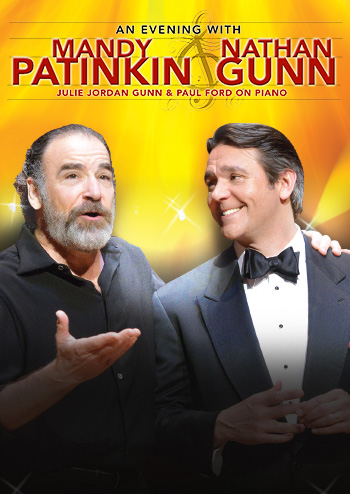