The wait is over – after much persuasion, television and movie legend William Shatner has agreed to bring his Broadway smash hit show to Australia.

Through stories, songs, jokes and poignant moments Shatner’s World takes audiences on a 100 minute theatrical voyage through his life and career, from Shakespearean stage actor to internationally acclaimed icon and raconteur, known as much for his unique persona as his expansive body of work including Star Trek, Boston Legal, the publication of 30 books and the release of several spoken word albums.

Launched on Broadway in 2012, SHATNER’S WORLD has received critical acclaim wherever it has played.

“I’ve done this one-man show on Broadway and in many cities across the United States,” said William Shatner. “At the curtain call, the audiences’ reaction, their love and appreciation, moved me to tears. This show has been one of the highlights of my life.”

Don’t miss this opportunity to share the room with one of the world’s great entertainers. 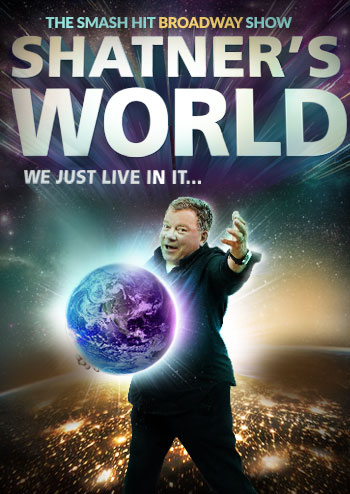