In 1967, Sergeant Pepper’s Lonely Hearts Club Band was the psychedelic explosion of craft and imagination that illuminated all that followed. Two years later, Abbey Road was the majestic swansong that sealed the Beatles’ status as the most fearlessly inventive hit men the world would ever see.

Back2Back is the live experience that era never saw: the bookends of the Beatles’ intense, innovative years of studio seclusion performed live in concert at last, in sequence and in their entirety, with a 17 piece band fronted by 6 of Australia’s most accomplished rock performers.

From Lucy In The Sky With Diamonds to Come Together; When I’m Sixty-Four to Here Comes the Sun; A Day In The Life to Something; these songs revolutionised the way rock music would be conceived and recorded and gave the world a score to hum forever. Now, for the first time, immerse your senses in living history. 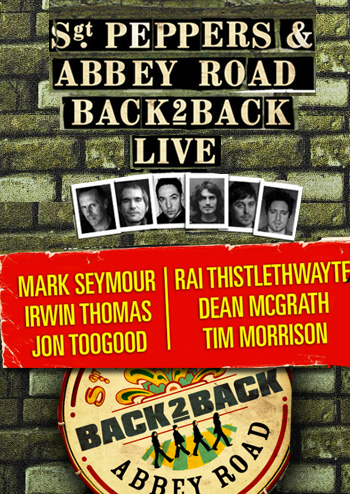