Brothers in Arms is without doubt one of the greatest albums of all time. It was Australia’s biggest selling album in 1985 and has sold an astonishing 30 million copies worldwide. Thousands upon thousands of Australians remember when Mark Knopfler and his band played to full houses around the country and a record breaking 21 consecutive performances at Sydney’s Entertainment Centre.

Twenty five years on, Classic Albums Live launches a new concept in live entertainment with an all-star recreation of a truly classic album. For one night only ten amazing musicians come together to play some of the greatest songs ever written with state-of-the-art lighting, sound and staging, in some of Australia’s best rock venues.

Brothers in Arms features the complete album played in full, including hit singles ‘Money for Nothing’, ‘So Far Away’ and ‘Walk of Life’, followed by a ‘greatest hits’ set featuring other unforgettable Dire Straits chart toppers including ‘Sultans of Swing’, ‘Romeo and Juliet’, ‘Tunnel of Love’ and ‘Going Home’. 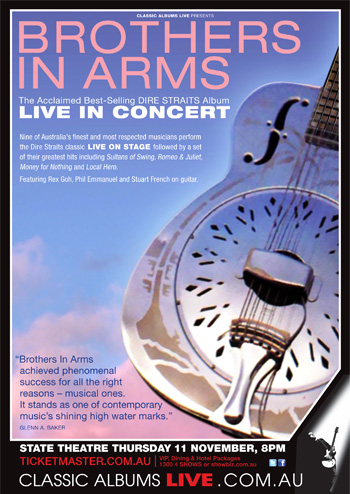