For one night only, one of the world’s leading culinary geniuses will appear live on stage at the State Theatre with renowned food critic and MasterChef judge Matt Preston. This is the evening to find out all of those things you’ve wanted to know about Heston Blumenthal – the personality, philosophies and genius of one of the world’s most entertaining and intriguing chefs.

Matt Preston will delve into Heston’s extraordinary career, his work in his laboratory in Bray, the creation of his signature dishes and his experiences in filming his many hugely popular TV Shows such as Heston’s Feasts. Heston will take the audience on a creative journey explaining the development and techniques of some of his most famous Fat Duck signature dishes.

Using clips from his TV shows and extraordinary photography he will tell the story behind dishes such as Flaming Sorbet or The Sound of the Sea with his personal commentary on why and how they were created. This will be an extraordinary evening where you will walk away with insights into the man, his creativity, his techniques, as well as acquire a vast knowledge of food from one of the world’s leading masters. 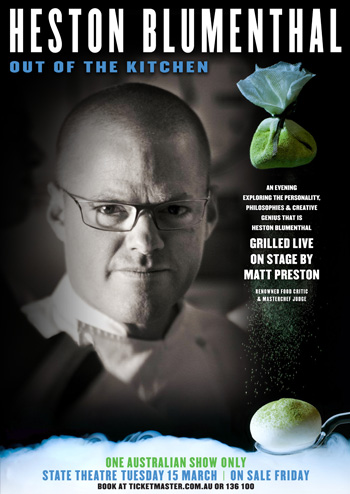