After sell out seasons at the Sydney Festival, Adelaide Cabaret Festival and the Edinburgh Festival Fringe in 2010, the phenomenon that is Smoke & Mirrors returns to Sydney for one last time.

iOTA’s deliciously unorthodox ringmaster heads up a cast of curious characters, including a vaudevillian tap dancer, a twisted chanteuse, bouncing rabbits, a sublime aerialist, a bewitching magician and a blistering live band, for a show that’ll blow your socks off.

Abandon the everyday and let yourself be seduced by the extraordinary Smoke & Mirrors. 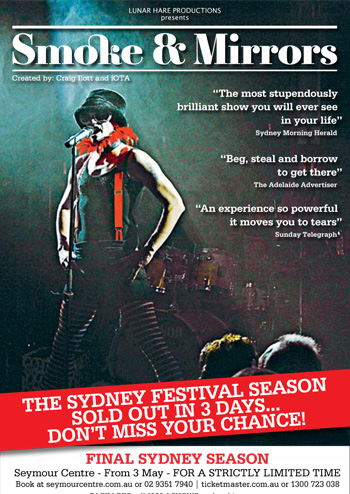