How do musicians become successful? Is it their connections and ability to reach an extended audience, their desire to travel or is it that certain talented people happen to be in the right place at the right time? As for Shankar Mahadevan, Ehsaan Noorani and Loy Mendonsa also know as Shankar Ehsaan Loy (SEL), they believe they are three individuals meant to be together and we think it’s fair to say that the world is grateful for their musical union. 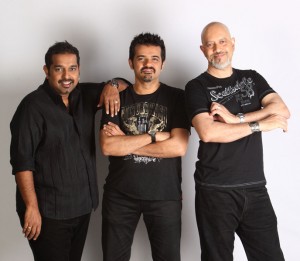 Each classically trained in one area of music, SEL’s sound has taken the world by storm. Though they may not be a household name to all of us, their sound is what is special and unmistakably recognizable. Thanks to the film industry it has been captured on a global scale.

Shankar Ehssan Loy are travelling the world, leaving their unforgettable musical footprint, slowly but surely, country by country. The electrifying combination of musical talent has recently wowed audiences in the UK and the Middle East and it’s not long until they hit Australian shores for the first time!

SEL will be performing live in Australia for the first time ever in February 2012. To purchase tickets for this not-to-be-missed event click here.