The Count Basie Orchestra has been responsible for the sound behind some of the world’s greatest vocalists, including the one-and-only, Frank Sinatra. It was during his teenage years that Sinatra started singing professionally despite learning music by ear and never actually learning how to read it. The legendary singer began his musical career in the Swing era and found extraordinary success as a solo artist in the 1940s. Sinatra joined Tommy Dorsey and his band in 1939 and in his first year with the band produced more than 40 songs, including ‘I’ll Never Smile Again’ which topped the charts for 12 weeks. 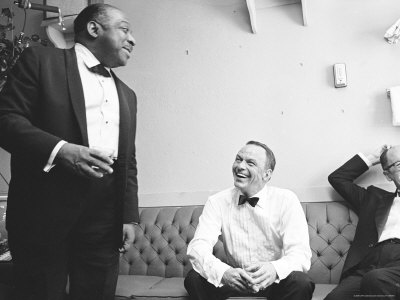 It wasn’t all fun and games for Sinatra and during World War II various rumours went around as to why he didn’t serve in the war such as paying his way out to avoid it. He was also criticized for staying home, making money and being photographed surrounded by beautiful women.

Despite a rocky patch his career jumped to the next level in the 1950s when he won an Academy Award for Best Supporting Actor in the drama ‘From Here to Eternity’. In the late 50s he signed with another record label, working with the most exceptional composers of the time including Nelson Riddle, Gordon Jenkins and Billy May and in 1959 his hit single ‘High Hopes’ remained on the Hot 100 Chart for 17 weeks.

It was in 1962 that Sinatra combined his talent with the Count Basie Orchestra for the recording of Sinatra-Basie. Due to its popularity Sinatra and Count Basie joined again in 1964 and recorded, ‘It Might as Well Be Swing.’

With a career in music and show business spanning seven decades, Frank Sinatra is an American and world idol.

You now have the chance to be part of this once-in-a-lifetime performance of a band who has supported such an incredible talent. Performances are strictly limited so don’t miss out on this unbelievable opportunity.

A Big Band In History

There’s nothing like the sounds of a ‘big band’ to takes us back to another time. The Count Basie Orchestra began to take on the world with their infectious swingin’ sounds, rising to prominence in the 1930’s.

Big bands began to dominate the jazz arena, forcing the older jazz generations to adapt to the various emerging styles or put down their instruments. The 1930s and 40s saw teens and young adults dancing to Big Bands on their radios, in their living rooms and going to as many live concerts to shuffle, spin and swing the night away!

The band members were much loved by their fans and they travelled far to perform for them, even if it was for one night only. Travelling and lodging in these times wasn’t always easy, often with a lack of sleep and food and it was up to the bandleader to hold it all together when the going got tough.

Big Bands also played a significant role in lifting the spirits in World War II, with many band members serving in the military. During this time some vocalists also started to go out on their own and Swing began to give way to other music styles such as Bebop.

Through decades of change, the Count Basie Orchestra is still taking the world by storm with their authentic Big Band sound and they’re making their way to Australia. Performances are strictly limited so don’t miss out on this once-in-a-lifetime opportunity to go back in time!