Few records echo down through the years like The White Album. The Beatles’ influential masterpiece is now a 40-year-old icon. To celebrate this rock’n’roll milestone, four of Oz rock’s finest – Chris Cheney of the Living End, Phil Jamieson of Grinspoon, Tim Rogers and Josh Pyke – will take to the stage this August for a national tour of this very special album.

Coming after India, but before the split, The White Album was the sound of John, Paul, George and Ringo throwing everything they’d learned into their musical blender. This major work bursts with variety, creativity, experimentation, and the genius of The Beatles during one of their most intense, fertile, periods. It is a timeless album, yet very much of its time. Its 30 songs veer from the populist stomp of Back in the USSR and the mind-bending Happiness is a Warm Gun to the melodious sorrow of While My Guitar Gently Weeps, the ska pop fun of Ob-La-Di, Ob-La-Da, and the hard rock prototype Helter Skelter.

The White Album songs will be performed in track order, starting with Back in the USSR and closing with Good Night, with state of the art sound. 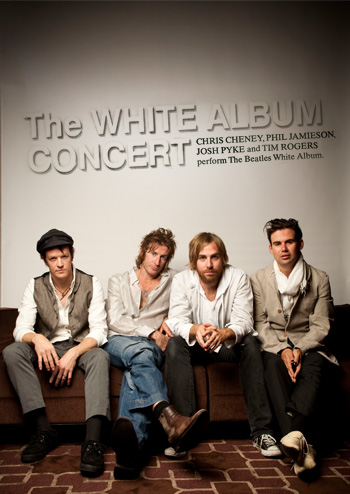